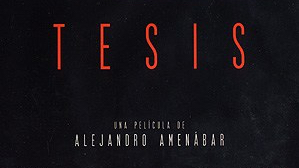 I feel very fortunate that as a film-nut I live with a girlfriend who is equally fond of spending an evening cwtching up (Welsh /kʊtʃ/ – a cuddle or hug) to watch a movie. Whilst discussing our favourite thrillers and crime movies after finishing Seven she asked if I had watched “Tesis” (Thesis). I had not. What’s more, I hadn’t even heard of it.

In case you haven’t either, this crime/thriller was the first feature-length directorial effort of Alejandro Amenábar – who would go on to direct The Others – another phenomenal film that I’d recommend if you’re ever in the mood for a spot of gothic horror – and the Oscar winning The Sea Inside (Mar Adentro) amongst others. Whilst not a directorial effort, the multifaceted Amenábar also scored a favourite Spanish-language film of mine, Butterfly’s Tongue (originally La Lengua de las Mariposas); Clearly not satisfied with “just” director and co-writer credits, Amenábar also scored Tesis, of course. Needless to say, I was already sold, and we watched it that very night…

… and absolutely loved it. Ángela, a film student writing a thesis on the effects of violence in the media on the family comes into possession of a snuff film, who she discovers features a girl who was a student at the same university and had disappeared two years before, throwing her into a game of cat and mouse in which the identity of the cat does not always seem so clear-cut. The story twists and turns, testing her loyalties, and turning allies into suspects and back. Very cleverly, the rate at which the most likely suspect changes increases throughout, before a rollercoaster finale in which many pieces of the puzzle are thrown firmly into their correct place. Much in the vein of other nineties crime films like The Silence of the Lambs and Seven, the killer is a highly intelligent and charming individual rather than a caricature and one-dimensional “villain”, though the lack of any law-enforcement bodies or formal procedural investigation sets it apart from most films in this genre (or at least those of a more procedural/investigative nature), and the vulnerability of the protagonists provides an especially dangerous and thrilling atmosphere throughout.

Aside from tackling many social issues particularly relevant to Spain at the time of writing, the story encompasses several now-clichéd concepts in modern thriller/horror cinema – found film, snuff films, psychopathy, serial killing – yet does so without seeming contrived. This is achieved by often working these concepts in as features of the plot rather than directly employing them as film techniques, coupled with the rather metafilmic inclusion of film student characters’ discussions of such topics within the script (snuff films are watched by characters in the film, cinematic violence debated with classmates and lecturers alike, and Ángela uses filming a documentary as a guise to interview her “suspects”, for example).

The acting is believable (though not entirely surprising, as many film student roles in the film were played by genuine film students) and the three lead actors would go on to have reasonably healthy careers in mostly Spanish-language cinema (Ana Torrent, Fele Martínez, and Eduardo Noriega). Slightly less believable is that a film written by a student and then filmed inside their faculty on a limited budget in only five and a half weeks could be such an excellent film.